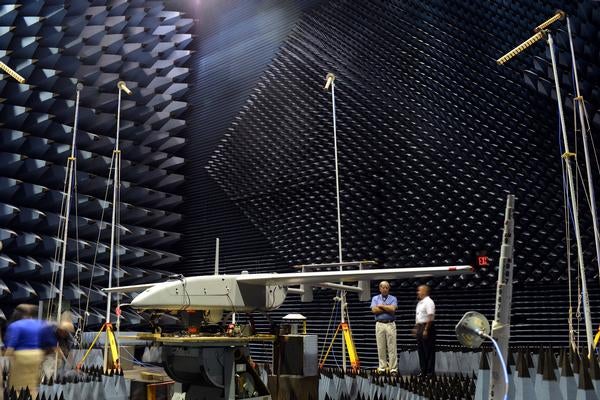 The US naval air systems command (NAVAIR) has conducted trials to see how interruption of the mission-critical global positioning data can be prevented by using miniaturised global positioning system (GPS) protection devices at the Naval Air Station on the Patuxent river, Maryland, US.

During the testing, the communications and GPS navigation programme office (PMW/A 170) had placed an Aerostar unmanned aerial vehicle (UAV), fitted with small antenna system (SAS), in a room lined with signal-absorbent material at the facilities for antenna and RCS measurements (FARM) and was subjected to GPS jamming signals.

PMW/A-170 unmanned aircraft systems communications and navigation lead Eric Stevens said the FARM facility was equipped with model jammers and was used as a stage for the "enemy" to jam the UAV’s GPS signal.

The team demonstrated and quantified the GPS anti-jamming device capability on the small UAV as part of the testing.

"If an enemy is trying to jam, or interfere with the GPS frequency, this antenna allows us to be able to track and acquire the true GPS satellites."

"If an enemy is trying to jam, or interfere with the GPS frequency, this antenna allows us to be able to track and acquire the true GPS satellites even in the midst of this jamming and interference," Stevens said.