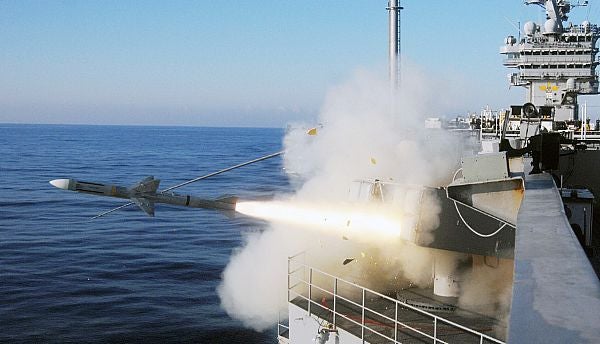 Nato SeaSparrow Consortium has received the Evolved Sea Sparrow Missile (ESSM) from Raytheon, marking the 2,000th delivery of the missile by the company.

Ed Roesly, Raytheon Missile Systems ESSM programme director, said: "ESSM is a model for global operations, and the delivery of our 2,000th missile demonstrates the significant commitment of our international team to continue providing this critical capability to the warfighter.

"We have delivered ESSMs for a decade and expect continued production past 2017."

Capable of protecting warships against anti-ship cruise missiles, the missile has been developed under a collaborative programme and the Nato Sea Sparrow consortium, which includes Australia, Belgium, Canada, Denmark, Germany, Greece, Netherlands, Norway, Portugal, Spain, Turkey, and the US.

An advanced version of the RIM-7 Sea Sparrow missile, the ESSM is used to strike high-speed, highly manoeuvrable anti-ship cruise missiles, as well as threats from surface and low-velocity air areas.

“We have delivered ESSMs for a decade and expect continued production past 2017."

Features of the medium-range, all-weather, semi-active radar-guided missile include an advanced fuse and enhanced firepower to bridge the capability gap between close-in air defence and local-area defence systems.

The missile also provides troops with increased performance against smaller, sea-skimming targets and can be launched without any prior warm-up.

Equipped with seven combat systems and four launching systems, the ESSM is currently in service with the US Navy and nine international fleets, across 20 ship classes.

With more than 200 at-sea firings to date, the ESSM programme is scheduled to conduct studies to advance the missile’s capabilities to defend future combat threat.