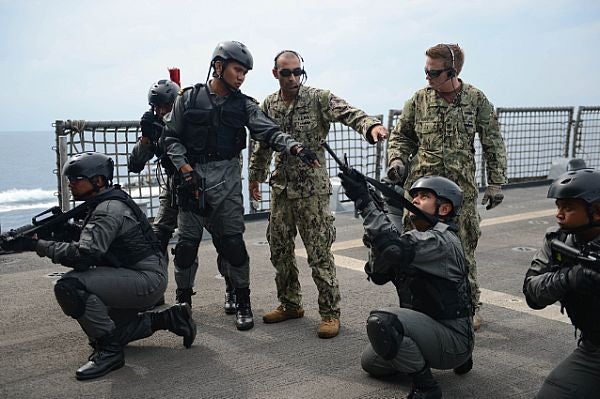 Navies from the US, Brunei, Indonesia, Malaysia, the Philippines, Thailand and Singapore have conducted their annual Southeast Asia Cooperation Against Terrorism (SEACAT) 2013 exercise from 2-12 September 2013.

During the exercise, the participating navies performed planning exercises at the Changi command and control (C2) centre at Changi Naval Base, Singapore.

The US Navy’s Freedom-variant of the littoral combat ships (LCS), USS Freedom’s (LCS 1) boarding team carried out a visit, board, search and seizure (VBSS) exercise with the Indonesian Navy, during the at-sea training event.

Freedom’s commanding officer commander, Pat Thien, said: "We did exactly what the ship was built to do: we operated in a near-shore environment, in littoral waters, with other ships similar in size and we were successful."

News
Ultra to deliver sonobuoys to support US Navy fleet

In addition, the drill involved both command post exercise at Singapore’s Changi Naval Base and a field training exercise in several regional locations at sea.

" The US Navy’s Freedom-variant of the littoral combat ships carried out a visit, board, search and seizure (VBSS) exercise with the Indonesian Navy."

The allied navies also conducted other drills such as tracking of ships, and the boarding of a merchant vessel simulating to be engaged in terrorist-related activities at sea.

First conducted in 2002, the SEACAT exercise aims to improve sea-based information-sharing and the coordination of maritime security responses in the region.

In addition to enhancing dialogue and practical cooperation during realistic scenarios, the drill provides hands-on practice for participating navies in maritime security operations, while highlighting information sharing and multilateral cooperation in scenarios.