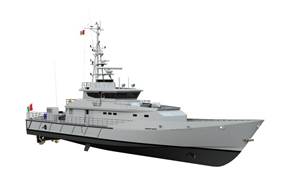 Under the contract, Damen will supply the design and material package while ASTIMAR 1, the Mexican Navy yard in Tampico, will build the patrol vessel.

In addition, Damen Shipyards will provide technical support to ASTIMAR 1 in order to optimise the delivery time and quality of the vessel, as part of the contract.

Designed to conduct patrol missions in coastal areas and the economic exclusive zone, the Damen Stan Patrol 4207 is fully equipped to support patrol duties in harbours, coastal waters and offshore.

Powered by controllable pitch propellers, the vessels have a length of 42.8m and a speed range of 25-30k, while accommodating a crew of 16.

"Powered by controllable pitch propellers, the vessels have a length of 42.8m and a speed range of 25-30k."

The Mexican Navy operates ARM Tenochtitlan (PC-331) and ARM Teotihuacan (PC-332), which started construction in 2011 and was delivered mid-2012.

Damen had delivered the Stan Patrol 4207 type vessel, Obzor, to the Bulgarian border police in July 2010, as well as the Oriku vessel of the class to the Albanian coastguard in February 2012 along with material package.

Similar vessels are currently operational with navies and coast guards of Jamaica, Barbados, the Dutch Caribbean, Honduras, the Canadian coastguard and the US coastguard.

The US coastguard has recently received five Sentinel-class fast response cutters, out of a series of 58, which are based on the same Damen Stan Patrol design.