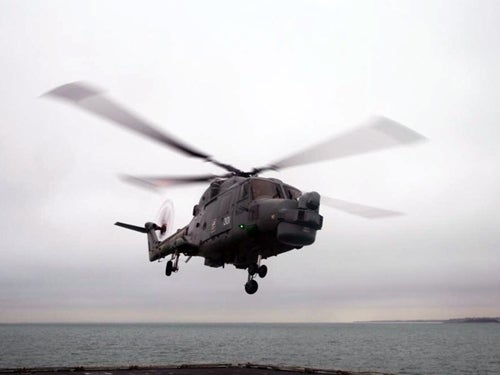 Trials were conducted as part of HMS Defender’s initial period of training under the White Ensign off the south coast, aimed towards operational declaration with the Royal Navy early next year.

Defender’s deputy logistics officer sub lieutenant Dan Drew said: "Preparing for an aircraft to land onto a warship is a task, which involves everyone aboard."

"From the obvious things, like planning and executing these operations, to the less obvious such as painstakingly checking the upper deck for debris, which could be harmful to the helicopter, everyone plays a part in increasing Defender’s capabilities that little bit further," Drew added.

"Preparing for an aircraft to land onto a warship is a task, which involves everyone aboard."

Armed with Stingray torpedoes, the Lynx Mk 8 is also equipped with a Sea Owl thermal imager and the Seaspray Mk 1 radar in the modified chin radome.

Equipped with Sea Viper missile system, which is capable of defending against multiple attacks by sophisticated anti-ship missiles, the newest £1bn Type 45-class destroyer has a displacement capacity of about 8,000t with a cruising speed of more than 27k and a range of at least 7,000nm.