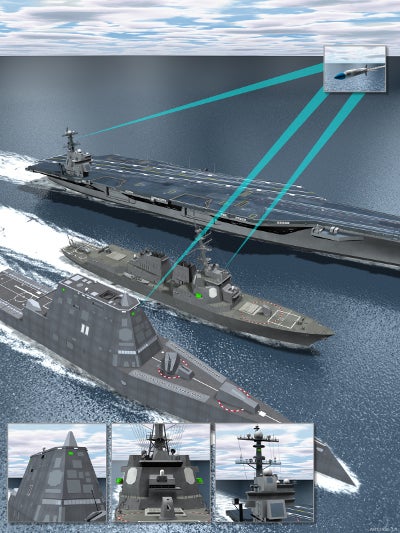 Under the $57m contract, Lockheed will modernise the AN/SLQ-32(V)2 systems currently installed onboard all US Navy's aircraft carriers, cruisers, destroyers and warships.

Designed to defend against anti-ship missile threats, the system will be upgraded with enhanced capabilities to help identify whether electronic sensors of an enemy's assets are tracking the navy's surface vessels.

"The system is the first sensor to be fully compliant with the navy's product line architecture strategy, which facilitates the rapid introduction of new technology into the fleet."

Lockheed Martin Mission Systems and Training SEWIP programme director Joe Ottaviano said that the SEWIP Block 2 upgrade will enable the system to establish a framework to easily install future upgrades, while continuing to outpace the threats.

"The system is the first sensor to be fully compliant with the navy's product line architecture strategy, which facilitates the rapid introduction of new technology into the fleet," Ottaviano added.

As part of an incremental programme to upgrade the existing AN/SLQ-32(V) Electronic Warfare System with new capabilities, SEWIP Block 2 will enhance the receiver/antenna group to defend the US naval fleet from a variety of advanced threats.

In 2009, the US Navy placed orders with Lockheed to develop and deliver SEWIP Block 2, with the company then successfully completing integration and testing of the two engineering development models.

A formal request for Block 3 proposals from the US Navy is expected this year.

Work on the SEWIP programme will be carried out at the company's Syracuse facility in New York, US.

Image: An illustration of Lockheed's SEWIP Block 2 solution protecting the fleet from a missile threat. Photo: courtesy of Lockheed Martin.