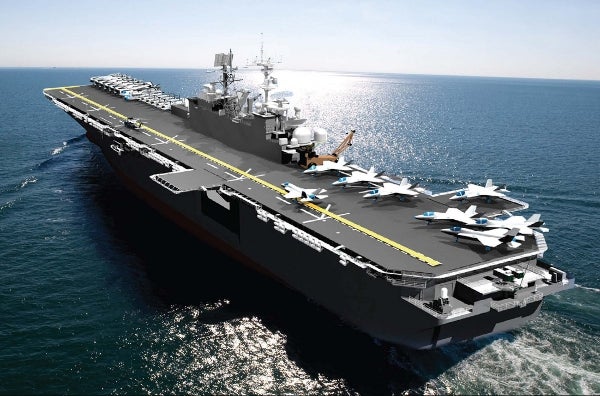 The subcontract follows after HII was awarded a $2.38bn fixed-price-incentive contract for the design and construction of LHA 7, for the US Navy.

Under the contract, L-3 will also provide the associated circuit breakers for the ship to support electrical distribution for the ship’s services and operating requirements.

L-3 SPDES president Christine Montalvo was quoted by ASD News as saying that based on the performance on LHA 6, the company is once again ready to provide the medium voltage switchgear for LHA 7.

"We responded to the US Navy’s challenge to build more affordable ships by using an approach that minimized non-recurring efforts," Montalvo added.

"Powered by a fuel-efficient gas turbine propulsion system, the vessel can also serve as the flagship."

The 106ft-wide vessel has a displacement of 44,971t and is capable of carrying a total of 1,059 crew members, besides marine helicopters, MV22 Osprey tilt rotor aircraft and F35B Joint Strike Fighter (JSF) aircraft.

Powered by a fuel-efficient gas turbine propulsion system, the vessel can also serve as the flagship for an expeditionary strike group, similar to the under construction USS America, which is scheduled to be launched in June 2013.

The company had previously supported all Nimitz-Class carriers and LHD 8 through similar power distribution products, in addition to delivering product support and maintenance from its depot repair facility.