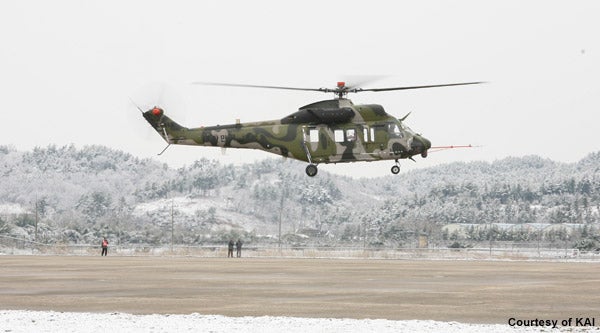 Under the KRW800bn ($713m) development programme, the company will design and develop the amphibious assault variant of its existing Surion Korea utility helicopter (KUH), which was designed to meet the needs of the South Korean Army and Air Force.

Development of the Surion-based helicopter variant is expected to start in July and be complete by the end of 2015, followed by mass production of the aircraft.

In an email, KAI was quoted by Flightglobal as saying that around 40 Surion amphibious helicopter variants are likely to be acquired by the Marine Corps to enhance its ability to transport troops and equipment in the littoral environment.

Modifications to the existing helicopter will include integrated flotation system, an auxiliary fuel tank and specialised radio equipment to support missions as part of the development programme.

“Development of the Surion-based helicopter variant is expected to start in July and be complete by the end of 2015."

The aircraft are expected to operate from the Republic of Korea Navy’s (ROKN) Dokdo-class landing platform helicopter (LPH) assault ships, which are capable of accommodating up to 15 helicopters, the news agency reported.

With a range and service ceiling of 260km and 3,000m respectively, the helicopter is armed with six BGM-71 tube-launched optically tracked (TOW) air-to-air missiles or four rocket pods and can accommodate a pilot, co-pilot, two gunners and nine troops.