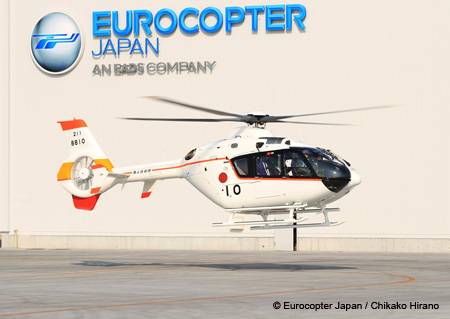 Delivered as part of a contract awarded to Eurocopter in 2009, the TH135 helicopter is used by pilots as instrument flight training.

The modern light twin-engine helicopter, EC135 has been designed to accommodate a maximum of eight passengers, while providing easy maintenance, manoeuvrability, high-visibility and low vibration levels.

Integrated with a glass cockpit and advanced technologies, the 3t EC135 helicopter has a low fuel consumption level and delivers reduced operating and training costs.

The aircraft is also equipped with Becker digital audio system (DVCS6100), designed for both rotary and fixed-wing applications, to provide the customer with improved performance, reduced wiring and weight.

"Since its debut in mid-1996, the company has delivered more than 1,000 EC135 helicopters globally to support a variety of missions."

The audio system components include the remote electronic unit (REU) 6100, the audio control unit (ACU) 6100, and the optional intercom amplifier IC3100, according to Shephardmedia.

Since its debut in mid-1996, the company has delivered more than 1,000 EC135 helicopters globally to support a variety of missions, including pilot training and law enforcement, emergency medical services (EMS) and search-and-rescue (SAR).