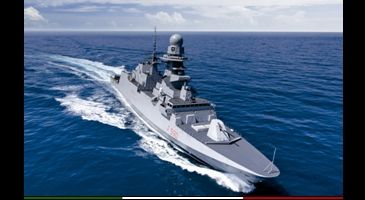 The delivery is part of a contract awarded to Orizzonte Sistemi Navali to build ten vessels for the Italian Navy to replace the ageing Fincantieri -built Lupo and Maestrale-class ships by 2021.

Established in late-2002, the FREMM multi-mission ship programme is part of a major cooperation agreement between France and Italy, under which 11 frigates will be built for France as well, with the deliveries closing in 2022.

Italy will receive the vessels in two versions: an anti-submarine warfare (ASW) model and a general-purpose (GP) vehicle.

"Italy will receive the vessels in two versions: an anti-submarine warfare model and a general-purpose vehicle."

The 144m-long and 19.7m-wide Carlo Bergamini has a full-load displacement capacity of 6,500t, a maximum speed of 27k and an accommodation capacity of 145.

Capable of supporting a range of missions and better safeguard the Mediterranean area, the FREMM frigates will also be used to conduct broad maritime defence strategies such as deterrence, protection, crisis mitigation and power projection.