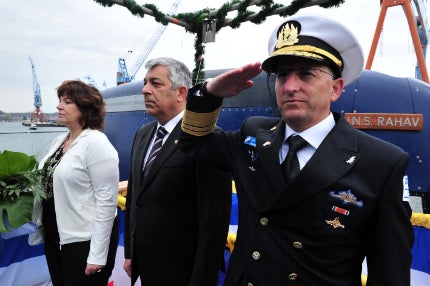 The Israeli Defence Force (IDF) and Ministry of Defence have launched the fifth Dolphin-class submarine, INS Rahav, during a ceremony at the shipbuilding division of Thyssen-Krupp Marine Systems in Kiel, Germany.

Procurement of INS Rahav follows an extensive development and acquisition process, which was carried out by the Ministry of Defense’s Procurement and Production Directorate with support from the Israeli Navy.

The navy currently operates three Dolphin-class submarines, which were delivered between 1999 and 2000 and manufactured by Howaldtswerke-Deutsche Werft (HDW), a unit of ThyssenKrupp Marine Systems.

Delivery of the fourth and fifth submarines was agreed for 2005, with Germany contributing around a third of the cost with a total of €333m.

In March 2012, Germany has also agreed to deliver the sixth Dolphin-class submarine, which is yet to be named, to Israel and will finance part of the total.

Powered by three 16V 396 SE 84 diesel engines, the 57.3m-long and 1,640t Dolphin-class submarines can run for up to 30 days and can conducting interdiction and surveillance operations and special missions.

Following completion of operational systems installation, the INS Rahav submarine will arrive in Israel in 2014 to replace the ageing Gal-class submarines, which entered service with the navy in 1977.