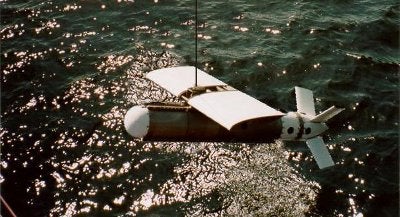 Under the contract, ISE will supply the towfish for the Royal Canadian Navy’s maritime coastal defence vessels (MCDV) to improve mine detection missions and route survey operations.

The Aurora Towfish will be modified by the company to integrate new sensors and navigation equipment, such as L3 Klein sidescan sonar, and an R2Sonic bathymetric multibeam echosounder.

Designed to operate at speeds of up to 12k, development of the modular Aurora Towfish started in February 1997.

Verified as a viable component of the Royal Canadian Navy’s route survey system, the Aurora Towfish with the Dorado semi-submersible technical demonstrator has been used since 1999 to conduct several sea operations and evaluations.

"The Aurora Towfish will be modified by the company to integrate new sensors and navigation equipment."

Integrated with the HMCS WhiteHorse route survey system payload, Aurora demonstrated its capabilities during an evaluation in Esquimalt January 2008.

In addition, the device validated its capacity to deploy various sonar modules in operational survey conditions during trials in Saanich Inlet, and approaches to Esquimalt Harbour.

Powered by four diesel electric engines with two direct current electric motors, the 970t and 55.31m-long ships have a beam of 11.30m, can cruise at a speed of 15k and accommodate a crew of 31.