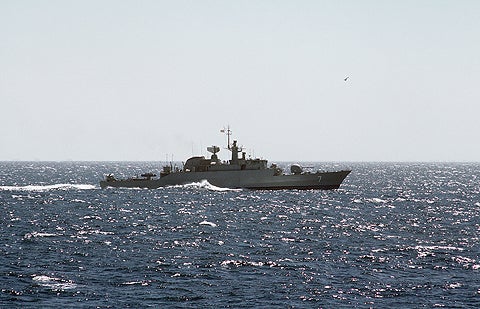 The Iranian Navy has launched its domestically built Mowj-class guided missile destroyer, the Jamaran 2, in an official ceremony in the Caspian Sea.

Following completion of final sea trials, the ship will be delivered to the Iranian Navy in the first half of the next calendar year, from 21 March until 22 September.

Launched in February 2010, the first Mowdge-class vessel, Jamaran, was deployed in October 2011 to the northern Indian Ocean to conduct anti-piracy patrols in the Gulf of Aden.

Designed with a helipad for carrying helicopters, and fitted with modern radars and electronic warfare capabilities, Jamaran is a multi-purpose destroyer that combines anti-submarine capabilities with defence systems to engage in surface, air and undersea warfare.

"The ship will be delivered to the Iranian Navy in the first half of the next calendar year."

Armed with a variety of anti-ship, surface-to-surface and surface-to-air missiles, as well as torpedoes, a smart ‘Nour’ (light) missile and modern naval cannons, the 94m-long Jamaran has a displacement capacity of 14,000t.

The Mowj-class vessels can accommodate a crew of 120-140 and cruise at a maximum speed of 30k.

Industrial and research affairs deputy defence minister Mohammad Eslami was reported by Press TV as saying that the Jamaran-3 ship is expected to enter operational service with the navy by the end of next year, to further bolster the country’s capabilities.