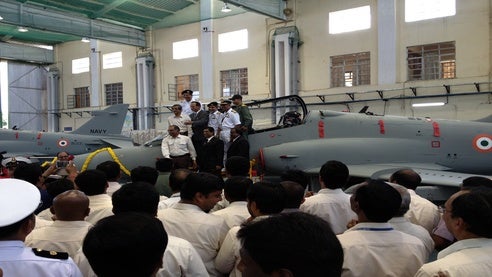 HAL is scheduled to deliver the first five AJT aircraft in the current fiscal, followed by remaining aircraft to Indian Navy in next three years.

Designed to provide most efficient and cost-effective method of training pilots by integrating air and ground based elements, the Hawk Mk132 is a dual seat multi-purpose aircraft, primarily used for basic, advanced and weapons training of the pilots.

"We are now looking forward to partnering with HAL in providing the Indian Air Force’s display team this fantastic aircraft."

"We have also submitted our response to HAL’s request for proposal for a potential order to supply products and services for the manufacture of 20 additional Hawk aircraft to the IAF, and are now looking forward to partnering with HAL in providing the Indian Air Force’s display team this fantastic aircraft," Griffiths said.

Powered by a single Rolls Royce Adour Mk.871 engine, the trainer jet can be used as a ground attack aircraft or for air defence and can perform wide range of aerobatic manoeuvres day or night.

Till date, the Indian MoD has placed orders for a total of 123 Hawk AJT aircraft, of which over 70 have been delivered to the Indian Air Force.