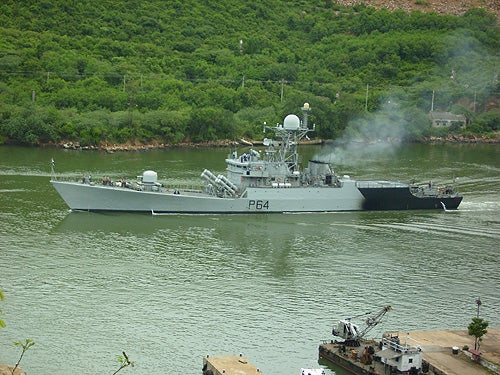 Built by Garden Reach Shipbuilders & Engineers (GRSE), INS Kiltan has been named after an island, Kiltan, located in the Lakshwadeep archipelago of India.

GRSE has been previously awarded a contract by the Indian Navy to build and deliver four 109m-long Project-28 ASW corvettes by 2016.

Capable of cruising at a speed of 25k, the 2,500t P-28 ASW corvettes will provide anti-submarine warfare capabilities with a low-signature of radiated underwater noise and operate under nuclear, biological and chemical (NBC ) environment.

Featuring advanced stealth technology, the ships will be equipped with domestically manufactured state-of-the-art weapons and sensors, which include a medium-range gun, torpedo tube launchers, rocket launchers and close-in weapon system.

In addition to Bow mounted Sonar, the vessels will be fitted with advanced integrated platform management system for controlling and co-ordinating propulsion, auxiliary and power generation equipment.

"The vessels will be fitted with advanced integrated platform management system for controlling and co-ordinating propulsion, auxiliary and power generation equipment."

The ships are powered by a CODAG propulsion system, consisting of twin gas turbines, twin diesel engines and twin diesel generators, which will drive two-shaft, controllable-pitch propellers, according to globalsecurity.org.

Launched in April 2010, the first GRSE-built ASW corvette, INS Kamorta is scheduled to be delivered to the Indian Navy by the year-end, while the second corvette, INS Kadmatt is currently under construction.

Scheduled for launch in 2014, the fourth ASW corvette INS Kavaratti will undergo trials prior to its delivery to the Navy in more than 20 months.