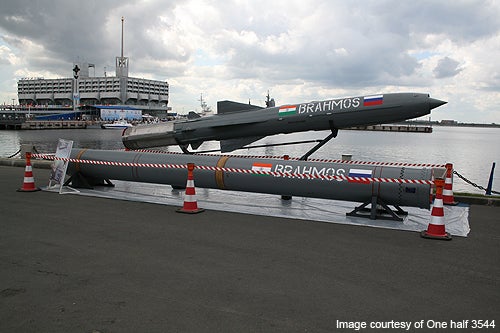 The Indian Ministry of Defence (MoD) has successfully test-fired the submarine-launched version of its supersonic cruise missile, Brahmos, from a submerged platform off the coast of Vishakhapatnam in the Bay of Bengal.

During the trials, the missile was launched vertically from an underwater pontoon and following a pre-defined trajectory, hit the designated target successfully, while meeting all the mission objectives.

In order to increase offensive power of the vessel while maintaining its defensive capability, Brahmos has been vertically installed in a modular launcher in the pressure hull of the submarine to enhance fire-power in underwater weapon delivery capabilities.

BrahMos Aerospace CEO A Sivathanu Pillai said: "Brahmos missile is fully ready for fitment in P75 of the Indian Navy in vertical launch configuration, which will make the platform one of the most powerful weapon platforms in the world."

DRDO chief V K Saraswat said that the successful launch of the missile marked a significant step ahead in bolstering India’s military capabilities.

"Brahmos missile is fully ready for fitment in P75 of the Indian Navy in vertical launch configuration, which will make the platform one of the most powerful weapon platforms in the world."

Based on the Russian-built P-800 Oniks/Yakhont supersonic anti-ship cruise missile, the 290km range weapon has a speed of Mach 2.8 and can be launched from land, naval and air platforms.

The naval variant of Brahmos missile also validated its capability from moving warships in both vertical and inclined launch configurations.

BrahMos ground and ship-launched variants have been successfully inducted into service with the Indian Army and Navy, while the Indian Air Force (IAF) is planning to equip Sukhoi SU-30MKI Flanker-H aircraft with aircraft-launched variant, BrahMos A.