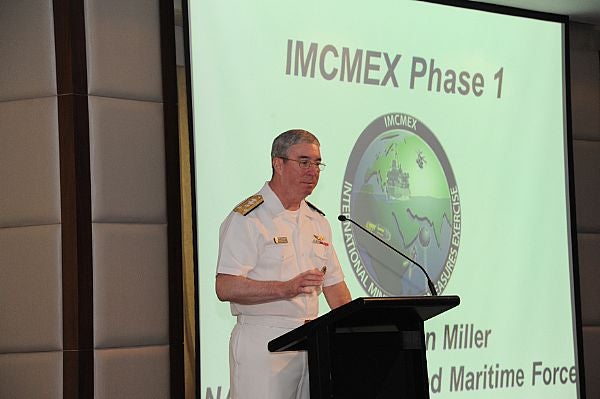 The International Mine Countermeasures Exercise (IMCMEX) 2012 is now under way in the Middle East to demonstrate the collaborative defence efforts in mine detection and clearance missions.

Involving navies from more than 30 countries, the exercise aims to strengthen relationships among the participating nations and enhance mine countermeasures interoperability.

In the first stage of the exercise, there will be a conference where participating navy units can exchange ideas and demonstrate the latest mine hunting, sweeping and neutralisation technologies.

The second stage involves tactical execution of missions by the ships, crews and observers. as well as conducting at-sea manoeuvres in the Arabian Gulf, Arabian Sea, Gulf of Oman, Red Sea, and parts of the Indian Ocean.

"Everyone here at IMCMEX 12 understands that countering the threat posed by mines is a critical mission to ensure security in the maritime domain."

Rear admiral Kenneth, commander of Perry Task Force 522 and exercise director, said: "Everyone here at IMCMEX 12 understands that countering the threat posed by mines is a critical mission to ensure security in the maritime domain."

Pentagon press secretary George Little said: "This is a defensive exercise aimed at preserving freedom of navigation in the international waterways of the Middle East and aimed at promoting regional stability in the US Central Command area of responsibility."