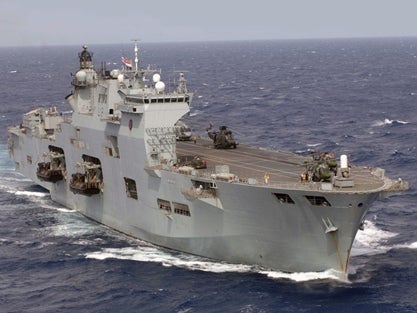 The Royal Navy’s amphibious assault ship, HMS Ocean, has come out of dock at Babcock’s Devonport Royal Dockyard at HM Naval Base Plymouth, half way through it’s 15-month upgrade and overhaul programme.

HMS Ocean’s seven months in-dock period marked an important milestone in its major maintenance and upgrade programme, which was carried out by Babcock as part of £65m 15-month refit contract for the Royal Navy.

The in-dock work included an overhaul of all the ship’s underwater valves, application of the outer bottom foul-release paint coating, a survey and represervation of tanks, and repair of several sea tubes.

The team conducted maintenance on the ship’s main propulsion system, propellors, shafts, rudders and stabilisers as well as overhauling and testing the ship’s mooring capstans.

Babcock warship support managing director Mike Whalley said: "There is still considerable work to be done, and the team will now focus on continuing to maintain this strong progress through the rest of the project, to deliver HMS Ocean safely, on-time, fully refurbished with improved capability and performance, at optimum value for money."

The upgrade programme involves more than 60 upgrades, mechanical improvements and an extensive maintenance package and is scheduled to undergo sea trials in early 2014.

Further work to be conducted on the vessel includes improvements to the crew living quarters, enhancement of the ship’s fire detection system and commissioning the main propulsion and auxiliary systems.