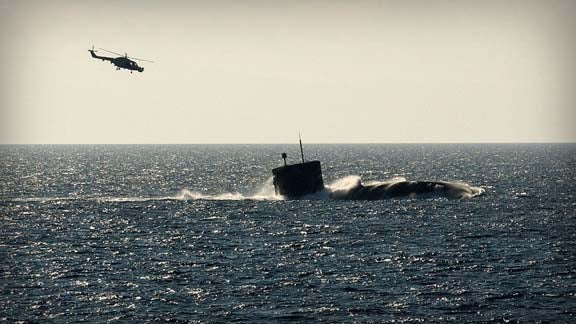 The UK Royal Navy’s Trafalgar-class nuclear-powered attack submarine HMS Torbay (S90) has successfully completed its flood-up, marking a milestone in the revalidation and assisted maintenance period (RAMP) undertaken by Babcock at Devonport Dockyard in the UK.

Around 85% of the work, including significant communications upgrades, has been completed on HMS Torbay as part of RAMP programme. The vessel has been afloat since its docking ten months ago.

Communications upgrades include installation of the Cromwell radio antenna to enhance internal communications and the ship alongside upgrade to provide connectivity, television and telephone services on board.

The submarine has also undergone on-destructive examination of the hull and ship’s systems, including the reactor primary circuit, and demonstrated its ability to conduct missions well into extended commission.

One of the submarine platform’s combined coolers has been overhauled and a revalidation of the circulating water system was also conducted.

"Around 85% of the work, including significant communications upgrades, has been completed on HMS Torbay as part of RAMP programme."

Work has been managed by a joint project team comprising Babcock, ship staff, and the UK Ministry of Defence (MoD), as a part of the RAMP programme.

HMS Torbay is due to undergo afloat repairs, which include the fitting of an integration package for the combat system and performing final revalidation tests to validate safety and integrity of the submarine’s systems.

Work is expected to be completed by summer 2013.

The Royal Navy operates a total of six Trafalgar-class nuclear-powered attack submarines, which were built by Vickers Shipbuilding and Engineering Limited (VSEL), and will be succeeded by Astute-class submarines.