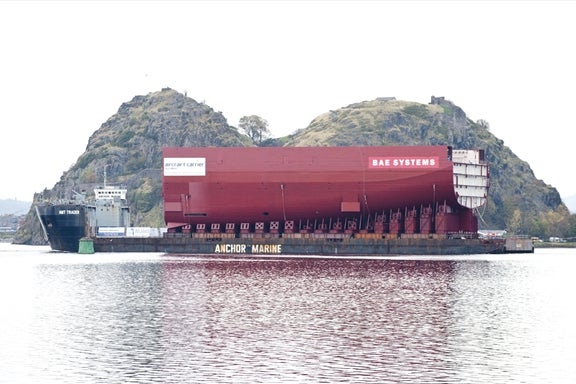 Following the arrival of the frigate’s aft section, officially known as Lower Block 04, BAE and Babcock personnel will work jointly to complete the ship’s assembly phase.

UK defence secretary Philip Hammond said: "Our next generation of aircraft carriers is on track with HMS Queen Elizabeth due to begin sea trials in 2017, and flight trials from her deck using our Lightning II fast jets in 2018.

"We are regenerating our carrier strike capability with the largest aircraft carriers Britain has ever had and fifth-generation stealth jets."

"We are regenerating our carrier strike capability with the largest aircraft carriers Britain has ever had and fifth-generation stealth jets."

Construction is currently underway on both Lower Blocks 03 and 04 of the second Elizabeth-class ship, HMS Prince of Wales in Govan, Scotland.

The individual blocks of the two frigates are being built at six shipyards around the UK; all will be transferred to Babcock’s Rosyth facility for final assembly and integration.

The 250m-long and 73m-wide Queen Elizabeth-class carriers will have a full-load displacement capacity of 65,000t, an operational range of 10,000nm and can carry up to 40 aircraft.

HMS Queen Elizabeth and HMS Prince Of Wales are expected to be operational with the Royal Navy in 2016 and 2018 respectively to replace Invincible-class vessels.

Powered by two Rolls-Royce Marine 36MW MT30 gas turbine alternators, the frigates can accommodate a crew of 1,200, including aircrew of 600.