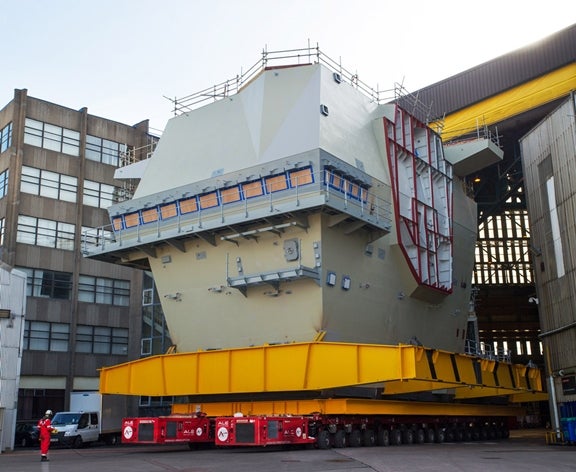 BAE Systems has rolled out the aft island in support of the UK Royal Navy’s new Queen Elizabeth-class (QE) aircraft carrier, HMS Queen Elizabeth, at the company’s Scotstoun yard on the north bank of the Clyde, UK.

Following its transfer to Scotland in mid-June, the 52m-long and 14m-wide island will be integrated on the aircraft carrier’s flight deck before the end of next month.

The 753t and 31m-high aft island will serve as the carrier’s equivalent of an airport control tower, to effectively direct flight deck operations on HMS Queen Elizabeth.

The first forward island, which will be home to the ship’s bridge and more than 100 other compartments, was integrated in April.

Queen Elizabeth-class carriers will have a full-load displacement capacity of 65,000t, an operational range of 10,000nm and can carry up to 40 aircraft.

"The 52m-long and 14m-wide island will be integrated on the aircraft carrier’s flight deck before the end of next month."

HMS Queen Elizabeth and HMS Prince Of Wales are expected to be operational with the Royal Navy in 2016 and 2018 respectively, replacing the Invincible-class vessels.

Work on both Queen Elizabeth-class ships is currently underway in Govan, Scotland, UK.

Powered by two Rolls-Royce Marine 36MW MT30 gas turbine alternators, the carriers can accommodate a crew of 1,200, including an aircrew of 600.