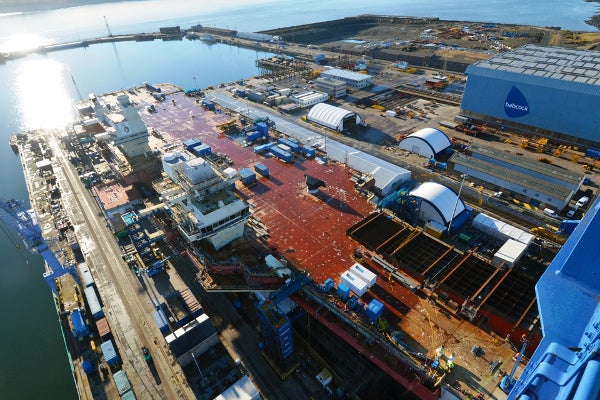 The 64m-long and 13m-wide ramp section, which will allow jet aircraft to take off from the ship, is the final exterior piece of the aircraft carrier to be integrated.

UK Defence Equipment, Support and Technology minister Philip Dunne said the UK MoD is on track to ensure carrier strike capability for the Royal Navy by 2020.

The UK MoD has already received three Lightning II aircraft to train Royal Navy and Royal Air Force (RAF) pilots on the aircraft in the US.

"Both the completion of the take-off ramp and the announcement of the contract for the fourth jet show the tremendous progress being made to ensure that the Royal Navy will have a modern carrier force."

"The programme is worth over £1 billion to UK industry each year and will support around 25,000 British jobs, over the next 25 years."

"Not only are these jets the most advanced ever operated by our armed forces, but the programme is worth over £1 billion to UK industry each year and will support around 25,000 British jobs, over the next 25 years," Dunne said.

Expected to be structurally complete next year, HMS Queen Elizabeth is scheduled to commence sea trials in 2017, followed by Lightning II aircraft flight trials in 2018.

MoD Materiel (Air) Chief, air marshal Simon Bollom said: "The latest contract for the fourth Lightning II means we are a step closer to realising the ambition of having the most advanced fast jets available for the Royal Air Force and Royal Navy to defend our nation’s interests."

Jointly operated by the RAF and the Royal Navy from RAF Marham in Norfolk, the F-35 jets will also be operating from the Queen Elizabeth-class aircraft carriers.