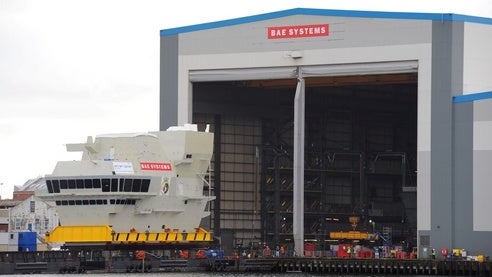 As a crucial component of the carrier, Upper Block 07 will include the main bridge and approximately 100 vital mission systems compartments.

BAE has tested the block to ensure it is weather-proof to undertake the first sea voyage, while clearing the UK Ministry of Defence audit to approve all compartments of the block.

The block will be lifted onto the carrier in March, followed by installation of the long-range radar on top of the Forward Island.

HMS Queen Elizabeth will also feature the Aft Island, which will serve the role of an airport control tower to manage aircraft movements.

Both the Forward and Aft islands will help increase the survivability of the ship, as they can carry out each other’s role during an emergency.

"BAE has tested the block to ensure it is weather-proof to undertake the first sea voyage."

The two 280m-long and 74m-wide aircraft carriers, HMS Queen Elizabeth and HMS Prince Of Wales, have a full-load displacement capacity of 65,000t and are expected to enter service in 2016 and 2018 respectively.

Aircraft Carrier Alliance (ACA), a joint venture between Babcock Thales, BAE Systems and the UK Ministry of Defence (MoD), is the prime contractor for the Royal Navy’s Queen Elizabeth-class programme.