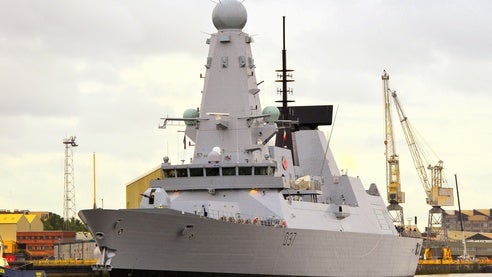 Royal Navy commander Phil Game said: "Putting to sea for the first time is a significant milestone in the early life of the ship and a tribute to the teamwork between BAE Systems, MOD and my Royal Navy personnel to get to this point."

During the three-week trials, the BAE Systems-built HMS Duncan will demonstrate its power and propulsion systems, auxiliary as well as domestic services.

BAE Systems Type 45 programme director Paul Rafferty said: "This is the sixth Type 45 destroyer to embark on sea trials, but there will be no complacency in the rigour with which we will put her through her paces and prove her outstanding capabilities."

"This is the sixth Type 45 destroyer to embark on sea trials, but there will be no complacency in the rigour with which we will put her through her paces and prove her outstanding capabilities."

The first, second and third Type 45 destroyers, HMS Daring (D32), HMS Dauntless (33) and HMS Diamond (D34), have been already deployed with the navy, while the fourth destroyer, HMS Dragon (D35), was formally commissioned into the frontline fleet earlier this year.

The fifth Type 45 destroyer, HMS Defender (D36), has successfully completed its second and final set of sea trials and is due to enter service with the navy in early 2013.

Launched in 2010, HMS Duncan will be based in Portsmouth, UK, while BAE along with the UK Ministry of Defence (MoD), Royal Navy and industry partners, will continue to provide ship support throughout its operational life.

Designed to boost UK’s naval air defence capabilities over the next 30 years, the Type 45 frigates will support missions including anti-piracy and anti-smuggling activities, disaster relief work and surveillance operations, as well as high-intensity war fighting.