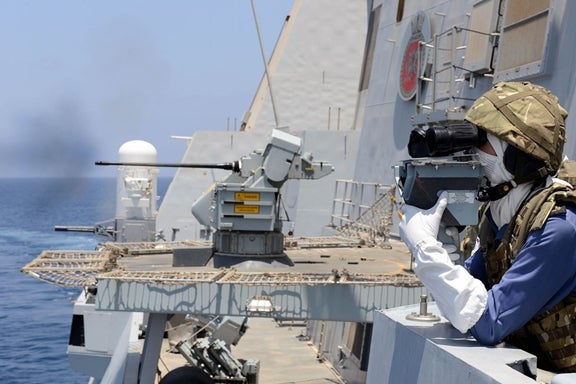 HMS Dragon (D35), the UK Royal Navy’s fourth Type 45 Daring-class destroyer, has once again demonstrated the capability of its onboard weapon systems during a target practice exercise in the Gulf of Aden.

Although equipped with fully automated systems, the ship’s weapon systems were manually operated by the crew, including AB Ben Pritchett and AB Holly Somers, without the help of its technology, as a part of the trial.

During testing, Dragon’s crew conducted small arms and sea boat-mounted firing against an indestructible target, a 1m cube of polystyrene.

HMS Dragon’s 30mm cannon, which is a radar or laser guided gun system used against air or surface targets, was also manually operated by the crew to validate its capability to destroy targets.

Commenting on operating the ship’s weapons without the aid of technology, AB Pritchet said: "It feels really responsible to know that the weapon system is pointing where you are looking."

"It feels really responsible to know that the weapon system is pointing where you are looking."

The cube was used repeatedly throughout the drill, enabling the vessel’s bridge team to practice handling skills during the process of recovering it.

Powered by two WR-21 advanced cycle gas turbine engines with intercooler and recuperator (ICR) heat exchangers, the vessels of the class will replace the Type 42 frigates, which have been in service with the navy since the mid-1970s.

HMS Dragon is currently on its seven-month maiden deployment off the Middle East to strengthen the country’s long-term commitment with allies and regional partners.