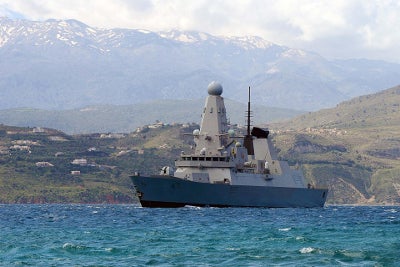 Members of the UK Royal Navy destroyer HMS Dragon’s (D35) Royal Marines boarding team have exercised with Greek forces at Nato base in Souda Bay on Crete’s north shore, to further enhance their skills in countering pirates and terrorists east of Suez.

The scheduled port call at the Nato base is the Daring-class Type 45 anti-air warfare destroyer’s fourth and final stop prior to its operational deployment through the Suez Canal and onto the Indian Ocean and Gulf.

A specialist training complex for boarding teams and naval forces sensors and weapons accuracy check site (FORACS) are located at the Nato base, which validate working condition of onboard sensors, communications, radars and sonars.

HMS Dragon’s Mk8 Lynx helicopter along with its crew flew to Chania Airport, which is the home base for the Hellenic Air Force’s 115 Fighter Wing for mountain flying training.

As part of the training, AgustaWestland-built Lynx multi-purpose military helicopter flew over the 8,000ft mountains under 10k-50k windy conditions.

"It gave us a great opportunity to fine-tune our flying skills and the hosting from the Greek Air Force was second-to-none."

Commenting on the exercise, 815 Naval Air Squadron flight commander lieutenant commander Paul Ellerton said: "It gave us a great opportunity to fine-tune our flying skills and the hosting from the Greek Air Force was second-to-none."

During the maiden six-month deployment, HMS Dragon will guard the shipping lanes in the Indian Ocean that are crucial for global trade and energy security.

Capable of accommodating a crew of 190, the 152.4m-long destroyer is powered by two WR-21 advanced cycle gas turbine engines with intercooler and recuperator (ICR) heat exchangers.