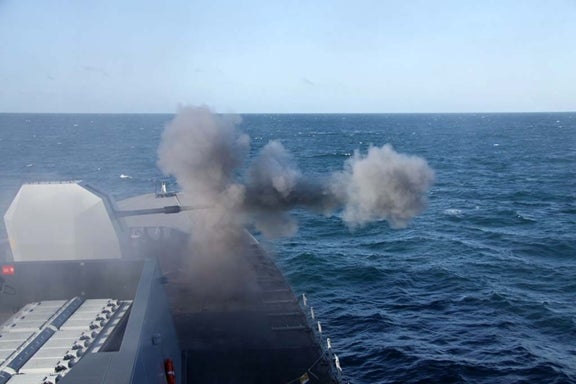 The destroyer recently completed testing of its decoy systems.

During the six-day trials, HMS Dragon fired 290 shells from its 4.5in Kryten main gun against towed surface targets while 30mm cannon fired at targets on the water and in the skies.

The 4.5in maintainer CPO Daryl Pounder said that the gunnery trials validated first real test for Dragon’s gun crews despite some minor problems with the gun testing.

The gunnery teams tracked the airborne target that was towed behind a Falcon aircraft using the ship’s electro-optical sensors and laser range finders.

The computer processors of the destroyer calculated the target’s trajectory and produced the firing solution for the main gun and cannon to fire the 30mm shells at the target.

Dragon’s gunnery officer lieutenant Peter Meigh said the gunnery trials were a true test for the ship’s gunnery department with many different drills required to be conducted over a tight schedule.

"Despite minor defects, the team fought through to achieve all the required serials, in the minimum amount of time," Meigh added.

Built by BAE Systems, the Type 45 warship is equipped with Sea Viper anti-air missiles and can be used for war fighting, surveillance, anti-piracy and anti-smuggling missions.

Dragon was launched in Scotland in 2008 and will be formally accepted by the Royal Navy into operational service on 27 April 2012 to join the front-line Fleet.

HMS Daring, the first destroyer in the class, has been recently deployed, Dauntless and Diamond are ready for deployment later this year while Defender is scheduled to be operational from early 2013.

The sixth of the Type 45 destroyer class HMS Duncan, launched in 2010, is currently under final stages of completion at Scotstoun.
Image: HMS Dragon’s fires at targets during gunnery trials. Photo: Royal Navy.