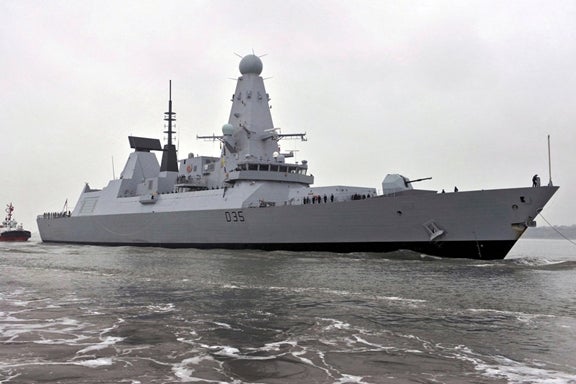 During the deployment, HMS Dragon will guard the shipping lanes in the Indian Ocean that are crucial for global trade and energy security.

In conjunction with other navies, BAE Systems-built Dragon will also assist in preventing maritime terrorism, countering piracy and deterring human trafficking to keep the seas safe.

Commissioned in April 2012, the 152.4m-long destroyer and its 190 crew have undergone intensive sea trials and training off the UK coast to help address unforeseen crises during deployment.

"Since leaving the builder's yard in Scotstoun nearly two years ago, and through intense combat system and propulsion trials and operational sea training, our focus has been about this moment."

HMS Dragon commanding officer captain Iain Lower said: "Since leaving the builder's yard in Scotstoun nearly two years ago, and through intense combat system and propulsion trials and operational sea training, our focus has been about this moment."

Launched in Scotland in 2008, the Type 45 ship is equipped with Sea Viper anti-air missiles and is capable of defending against multiple attacks by sophisticated anti-ship missiles.

Powered by two WR-21 advanced cycle gas turbine engines with intercooler and recuperator (ICR) heat exchangers, the vessels will replace the Type 42 frigates, which have been in service with the navy since the mid-1970s.