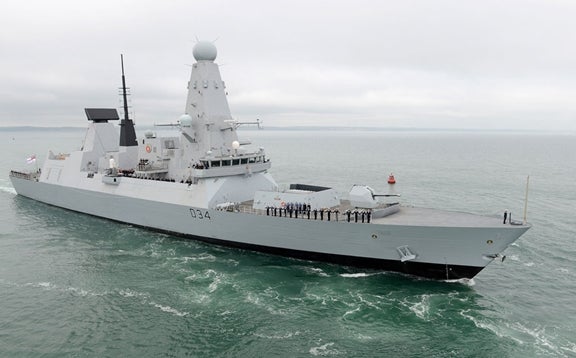 The destroyer will take command from the frigate HMS Daring (D32), which has been deployed in the Middle East since the early part of this year.

During the six-month deployment, HMS Diamond will conduct maritime security patrols in the Indian Ocean, the Gulf of Aden and the Gulf region, as well as perform various operations that range from countering piracy and smuggling operations to working with the UK’s allies in the region.

The deployment follows HMS Diamond’s completion of its main armament test firing on a range off the Outer Hebrides, Scotland.

UK defence secretary Philip Hammond said: "The Royal Navy continues to make a significant contribution to protecting the freedom of the seas and Britain’s interests across the globe."

HMS Diamond commanding officer commander Ian Clarke said: "We are ready for all of the likely scenarios we may encounter."

"We are ready for all of the likely scenarios we may encounter."

Capable of operating a range of helicopters from its flight deck, the 152.4m-long and 21.2m-wide HMS Diamond has been designed to support a wide range of missions, including humanitarian and anti-smuggling.

With a displacement capacity of 7,350t, the destroyer can cruise at speeds of around 33mph and accommodate a crew of 235.

Earlier this year, the fourth Type 45 destroyer, HMS Dragon (D35), was formally commissioned into the frontline fleet, while the second and first of Type 45 destroyers, HMS Dauntless (D33) and HMS Daring, are currently operational with the Navy.

The Type 45 destroyer fleet will replace the Type 42 frigates, currently in service with the navy since the mid-1970s.