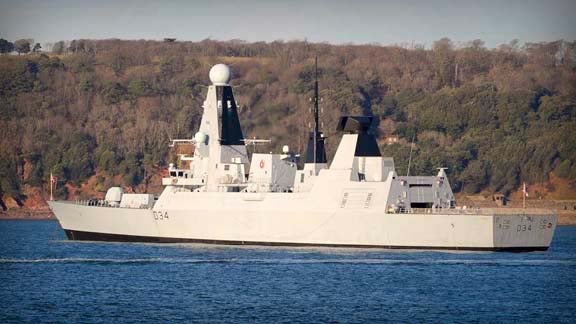 The UK Royal Navy’s third Daring-class Type-45 anti-air warfare destroyer, HMS Diamond (D34), participated in an exercise with the US Navy’s USS Enterprise-led US carrier strike group 12 (CSG 12) in the Middle East in a bid to demonstrate its air defence capabilities.

The Type-45 destroyer’s crew watched F-18 Super Hornets and other aircraft sorties off the deck of the Enterprise during the exercise.

The exercises also involved the exchange of knowledge and experience between the ships.

Following the completion of the exercise, HMS Diamond resumed its first six-month maiden deployment duties off the east of Suez to provide security and stability in the Persian Gulf.

The destroyer took command from the frigate HMS Daring (D32) in June, which has been deployed in the Middle East since the early part of 2012.

HMS Diamond is conducting maritime security patrols in the Indian Ocean, the Gulf of Aden and the Gulf region, as well as performing various operations such as countering piracy and smuggling.

The 152.4m-long and 21.2m-wide HMS Diamond is capable of operating a range of helicopters from its flight deck and has been designed to support a wide range of missions, including humanitarian and anti-smuggling.

With a displacement capacity of 7,350t, the destroyer can cruise at speeds of around 33mph and accommodate a crew of 235.

Earlier this year, the fourth Type 45 destroyer, HMS Dragon (D35), was formally commissioned into the frontline fleet, while the second and first of Type 45 destroyers, HMS Dauntless (D33) and HMS Daring, are currently operational with the Navy.

The Type 45 destroyer fleet will replace the Type 42 frigates, currently in service with the navy since the mid-1970s.