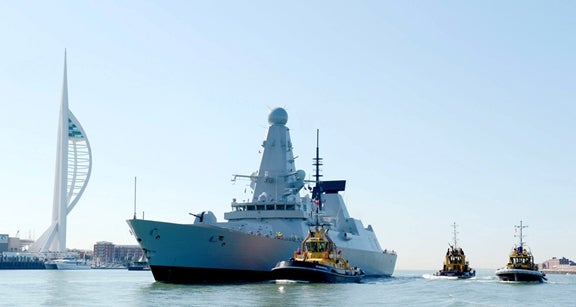 The UK Royal Navy’s fifth Type-45 Daring-class anti-air warfare destroyer, HMS Defender (D36), will be formally commissioned into the fleet on 21 March at Portsmouth Naval Base, UK, marking its transition into frontline service.

HMS Defender current commanding officer commander Phillip Nash said: "The commissioning of HMS Defender is a hugely significant day in this state-of-the-art warship’s life; it marks the point at which building and testing the ship finishes and frontline service in the fleet begins."

The destroyer has completed trials of its upper deck gunnery systems early this month, during which it test-fired the 4.5in Kryten main gun, 30mm cannon, miniguns, and validated their capabilities.

Capable of operating a Chinook-sized helicopter from its main deck, HMS Defender completed its second and final set of sea trials in April 2012.

"The commissioning of HMS Defender is a hugely significant day in this state-of-the-art warship’s life."

Launched in 2010, HMS Duncan was initially scheduled to depart last week, but was delayed due to technical problems.

Powered by two WR-21 advanced cycle gas turbine engines, the Type 45-class destroyers have a displacement capacity of about 7,500t, a cruising speed of more than 27k and a range in excess of 7,000nm.