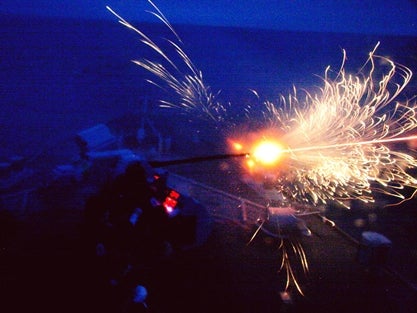 During the testing, which followed the completion of the ship’s refit earlier this year involving installation of new caterpillar engines, the vessel tested firing the 30mm main gun.

The crew onboard the 750t ship demonstrated their ability to deal with fires and floods onboard the vessel, attacks from a range of threats, in addition to assisting other vessels in distress and performing a mine warfare mission.

Royal Navy diver Kevin Beecher said: "It has been very beneficial to get up to Scotland and put training into practise after the time in refit. It has been challenging but you learn a lot."

"The crew onboard the 750t ship demonstrated their ability to deal with fires and floods onboard the vessel."

BAE was awarded the £15m contract by the UK Ministry of Defence (MoD) in October 2010, to replace the 30-year-old propulsion systems onboard the Royal Navy’s eight Hunt-class vessels.

Under the contract, the company will integrate new engines, gearboxes, bow thrusters, propellers and machinery control systems on to all vessels in this class by 2016.

Equipped with two Eca PAP 104 Mk3 remotely controlled mine disposal vehicles for the identification and disposal of mines, the vessel is armed with a MSI DS 30B 30mm naval gun and a Dillon Aero M134 mini gun close-in weapon system.