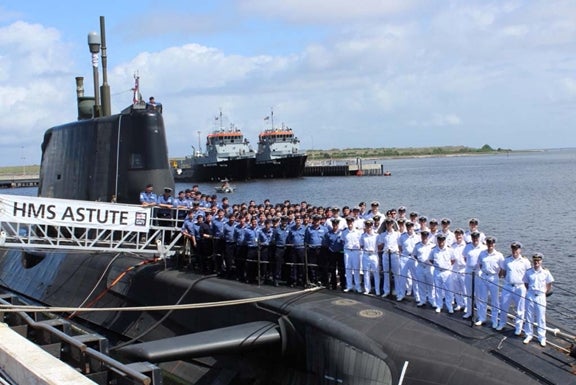 HMS Astute (S119), the UK Royal Navy’s first of seven Astute-class nuclear-powered submarines, has successfully completed its final sea trials in the US, marking readiness for its maiden operational deployment by the end of 2013.

During the recent warm water and other trials, the new submarine validated its capability at sea temperatures of 25°C on the principal proving ground of sub-surface warfare, Atlantic Undersea Test and Evaluation Centre (AUTEC) on Andros Island in the Bahamas.

Following one of month testing at AUTEC, the submarine sailed to Kings Bay in Georgia, home of the US Navy’s Atlantic-based ballistic missile submarines, to prepare for the final trials and stock-up before returning to Clyde.

In preparation for its first deployment, the vessel is required to undergo further operational sea training, and will then be handed over for frontline duties.

"The vessel is required to undergo further operational sea training, and will then be handed over for frontline duties."

Built by BAE Systems, the vessel can cruise at a submerged speed of 29k, while carrying a crew of 98 and is armed with 36 torpedoes and missiles, including Tomahawk cruise missiles, Spearfish torpedoes and mines with six 533mm torpedo tubes.

Powered by a nuclear reactor to operate for 25 years without refuelling, the 93m-long, 11.3m-wide submarine will eventually replace existing Swiftsure and Trafalgar-class vessels.

The second submarine of the class, HMS Ambush (S120), is scheduled to be operational in 2014, the third submarine HMS Artful (S121) is yet to undergo final construction phase and the fourth boat, HMS Audacious (S122) is likely to enter service in 2018.

The fifth and sixth vessels, HMS Anson (S123) and HMS Agamemnon (S124), are expected to be commissioned in 2020 and 2022 respectively, while construction is due to start on the seventh submarine, HMS Ajax (S125).