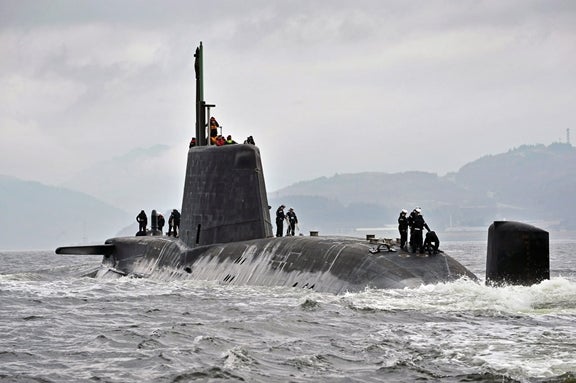 The UK Royal Navy’s nuclear-powered submarine, HMS Astute has completed a series of extensive sea trials off the eastern seaboard of North America, intended to validate the submarine’s capabilities.

HMS Astute commanding officer commander Iain Breckenridge said that the submarine surpassed every expectation during the trials.
"We fired off four Tomahawks, aimed at a corner of Eglin Air Force Base to test for accuracy, and we fired six Spearfish torpedoes, including the first salvo firing by a British submarine for 15 years," Breckenridge added.

The 93m-long, 11.3m-wide submarine has a maximum submerged displacement of 7,400t, can cruise at a submerged speed of 54km/h, accommodate a crew of 98 and is equipped with Spearfish torpedoes.

The vessel’s sonar is capable of tracking ships at a distance of 4,830km away and its missiles, with a target range of 1,930km, can be re-programmed during mid-flight to engage another target even if the submarine is thousands of kilometres away.

Additional features include a digital optical mast system which replaces the conventional periscope, offering low light and infrared capabilities, significantly helping the submarine to quickly capture and analyse visual data, and share with other fleet assets.

Powered by a nuclear reactor, the submarine can operate for 25 years without refuelling, allows for submerged patrols of up to 90 days and remains undetected.

The submarine is expected to undertake a variety of missions upon commissioning that include anti-ship and anti-submarine missions, intelligence gathering and support for land forces.

Astute, which returned to its homeport in Scotland, UK, will now undergo a base maintenance period at Faslane Naval base, UK following more sea trials later in 2012.