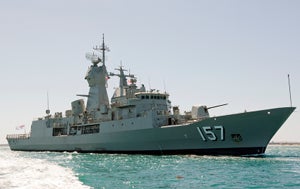 The ship has been equipped with the multi-phased array radar system as a part of the Navy’s anti-ship missile defence (ASMD) upgrade programme, aimed at safeguarding the ship from supersonic cruise missile attacks.

Developed by the US and Australian military in a joint venture, the CEAFAR radar and CEAMOUNT Missile Control Illuminator provides simultaneous 3D volume and surface surveillance in littoral and open ocean environments.

"The upgrade allows the frigate to identify, track and guide missiles towards several targets simultaneously, as well as detect and destroy incoming cruise missile attacks."

The Navy’s remaining seven Anzac-class frigates will be upgraded with an advanced anti-ship missile defence system by 2017, as part of the $650m contract announced by the Australian Defence Ministry.

The DMO, along with Saab Systems and BAE Systems, will carry out the upgrade installation and integration work for the remaining seven Anzac-class frigates.

HMAS Perth will also participate in Rim of the Pacific (RIMPAC) 2012 exercise as part of its deployment off the US west coast and Canada later on this year.