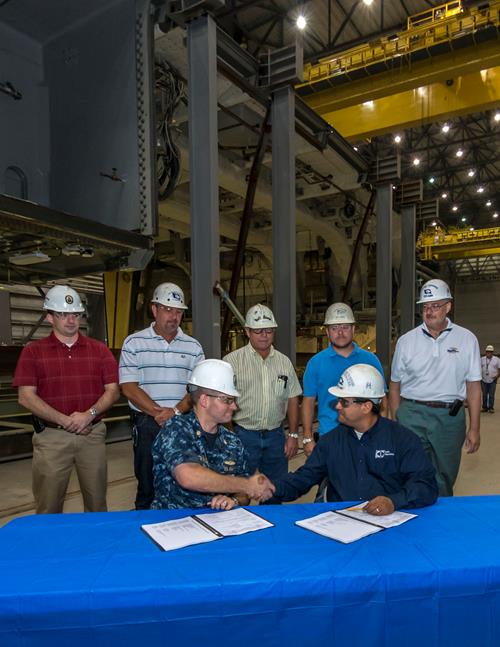 Huntington Ingalls Industries (HII) has delivered a composite hangar for the US Navy in support of the second Zumwalt-class guided missile vessel, USS Michael Monsoor (DDG 1001).

The company is responsible for manufacturing the hangar, peripheral vertical launch system (PVLS) and composite deckhouse for USS Michael Monsoor.

With the PVLS already delivered in July 2013, the USS Michael Monsoor’s remaining parts for the deckhouse are expected to be delivered in first quarter of 2014.

Ingalls DDG 1000 programme manager Steve Sloan said: "Our shipbuilders’ performance on this hangar composite construction has allowed us to deliver it nine days ahead of the commitment made last year."

Designed to significantly enhance the ship’s survivability, the PVLS can distribute the missile launchers for the vessel in separate four-cell launcher compartments along the ship’s hull.

"Our shipbuilders’ performance on this hangar composite construction has allowed us to deliver it nine days ahead."

The Zumwalt-class guided-missile naval vessels will be armed with tactical tomahawk, standard missile SM-3 and the evolved Sea Sparrow missile (ESSM) to provide offensive, distributed and precision fires in support of forces onshore.

The first and third Zumwalt-class ships, USS Zumwalt (DDG 1000) and future USS Lyndon B Johnson (DDG 1002), are scheduled to be delivered to the US Navy in fiscal year 2014 and fiscal year 2018 respectively.

Expected to be delivered to the navy in the fiscal year 2016, the 610ft-long USS Michael Monsoor will provide independent forward presence and deterrence while supporting special operations forces.

Image: Officials during composite hangar delivery to the US Navy for the USS Michael Monsoor (DDG 1001). Photo: courtesy of Lance Davis.