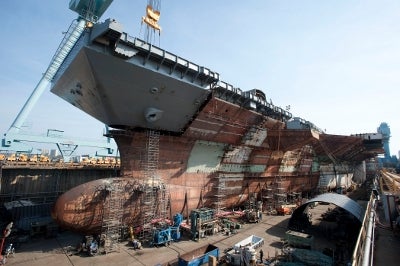 Representing the completion of flight deck on the carrier, which weighs 787mt and comprises 19 steel sections, the Gerald R Ford vessel is now 96% complete in its structural development programme.

The upper bow is one of the 496 units used to construct the carrier in the dry dock and joins the lower bow section, which was installed on 24 May 2012.

Designed to replace Nimitz-class aircraft carriers for the US Navy, the Ford-class carriers will be armed with the Raytheon evolved Sea Sparrow missile (ESSM) to strike against high-speed, highly manoeuvrable anti-ship missiles, as well as a rolling airframe missile (RAM) close-in weapon system.

"We have now structurally erected the flight deck to its full length."

Additional features of the ship include flexibility for the implementation of future technologies and $4bn reduced total ownership cost when compared with a Nimitz-class aircraft carrier.

Scheduled to launch later this year, the 1,092ft-long Gerald R Ford will have a beam of 134ft and can arm, refuel, launch and recover aircraft quickly.

The second ship of the class, John F Kennedy (CVN 79) is also currently under construction and is expected to be complete in 2020.