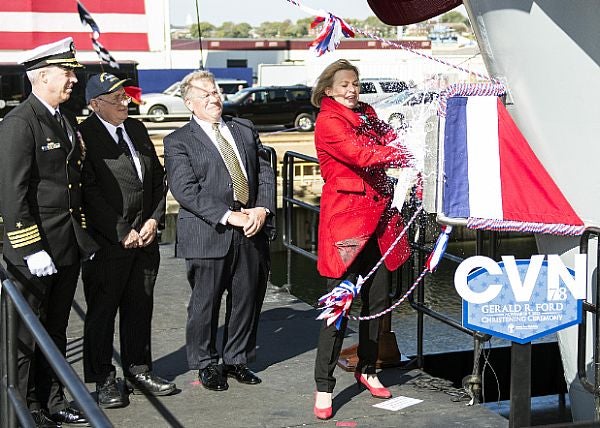 The aircraft carrier has been named to honour the 38th president of the US who also attained the rank of lieutenant commander in the navy, serving on the light carrier USS Monterey (CVL-26) during World War II.

NNS president Matt Mulherin said: "When USS Gerald R. Ford joins the Navy’s fleet in 2016, she will reign as America’s queen of the seas for 50 years."

"The aircraft carrier has been named to honour the 38th president of the US who also attained the rank of lieutenant commander in the navy."

Scheduled to be delivered to the US Navy in 2016, the 1,092ft-long Gerald R Ford will have a beam of 134ft and can arm, refuel, launch and recover aircraft quickly.

The Ford-class carriers, which will replace Nimitz-class aircraft carriers for the US Navy, will be armed with the Raytheon-evolved Sea Sparrow missile (ESSM) to strike against high-speed, highly manoeuvrable anti-ship missiles, as well as a rolling airframe missile (RAM) close-in weapon system.

Designed with significant quality-of-life improvements and reduced maintenance, the Ford-class ships are expected to enhance operational availability and capabi.lity as well as reduce total ownership cost by $4bn compared with the Nimitz-class carriers.