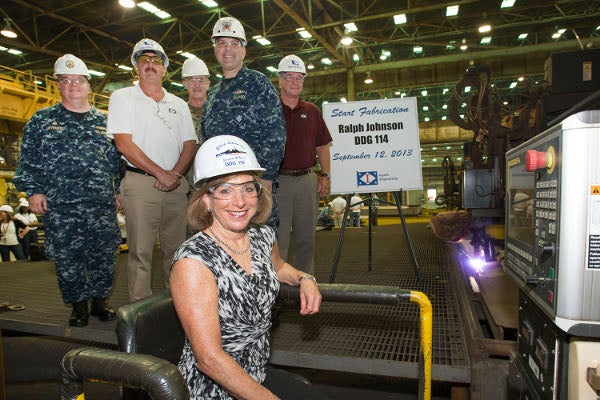 More than 100t of steel has been cut for the fabrication of the vessel.

USS Ralph Johnson, which was named after Marine Pfc. Ralph Henry Johnson, who received the medal of honour for his heroic actions during the Vietnam War.

HII’s DDG 51 programme manager, George Nungesser, said: "We have talented, experienced shipbuilders working on this programme, and they have provided excellent quality on Aegis destroyers since the programme’s inception."

In September 2011, the US Navy had awarded a contract to HII for the construction of DDG 114, as a flight IIA Arleigh Burke-class (DDG 51) destroyer.

"The USS Ralph Johnson was named after a marine who received the medal of honour for his heroic actions during the Vietnam War."

The 509ft-long Arleigh Burke-class vessels have a displacement capacity of 9,500t. They can cruise at a speed of 30k and are equipped with advanced sensors, as well as weapons systems to engage anti-ship missile threats.

Scheduled to be delivered to the navy in the first half of 2017, the USS Ralph Johnson multi-mission ship can support missions ranging from peacetime presence and crisis management to sea control and power projection, all in support of the US military strategy.

USS John Finn (DDG 113), the first of the DDG 51-class programme continuation ships, is scheduled for delivery to the US Navy in the third quarter of 2016.