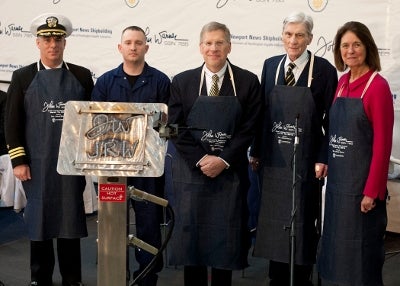 USS John Warner is being built under block III construction contract and has been named to honour former US senator from Virginia and navy secretary, John Warner.

The submarines of the class will also support a range of warfare missions including anti-submarine, anti-surface ship, strike, irregular and mines, in addition to special operation forces support, intelligence, surveillance and reconnaissance.

Capable of cruising at a submerged speed of 25k with a beam of 34ft, the boats can accommodate a crew of 134.

The tenth Virginia-class submarine, pre-commissioning unit (PCU) Minnesota (SSN 783) is scheduled for commissioning on 7 September, while PCU North Dakota (SSN 784) will be christened by the end of this year.

Construction on PCU Delaware (SSN 791) is expected to start on 2 September.

Work on USS John Warner is about 59% complete and is due to be delivered to the US Navy in 2015.