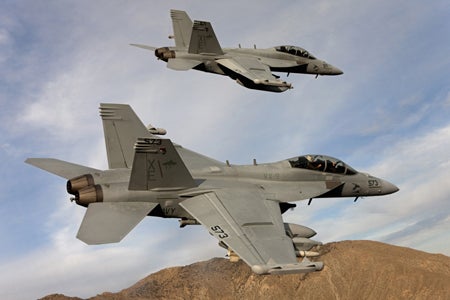 The Government Accountability Office (GAO) has ruled in favour of BAE Systems’ bid protest against the US Navy’s decision to award next-generation electronic jamming (NGJ) system contract to Raytheon.

BAE had filed a formal protest in July against the US Naval Air Systems Command’s (NAVAIR), with concerns over the $279.4m NGJ contract evaluation, according to Reuters.

GOA said the US Navy did not reasonably evaluate the technical risk of the proposal and failed to adequately document its evaluation as well as improperly crediting Raytheon with outdated experience.

Raytheon was selected to design and build critical technologies for the NGJ pod, which will replace the aging ALQ-99 tactical jamming system onboard the US Navy’s EA-18G Growler electronic-attack aircraft, as part of the 22-month cost-plus-incentive-fee contract.

"GOA said the US Navy did not reasonably evaluate the technical risk of the proposal and failed to adequately document its evaluation."

The US Navy is being recommended by the GOA to re-evaluate proposals and properly document the evaluation record, according to Washington Technology.

A BAE spokeswoman said: "We look forward to working with the navy to ensure a fair and open evaluation of our proposal for this important programme."

The EA-18G Growler aircraft, a replacement for the US Navy’s ageing EA-6B Prowler aircraft, is armed with the AIM-120 AMRAAM advanced medium-range air-to-air and AGM-88 HARM high-speed anti-radiation missiles.