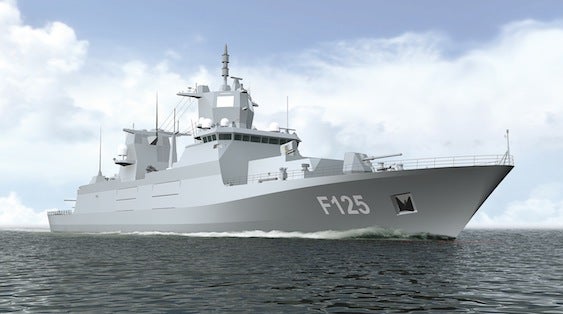 During the trials, conducted by German procurement authority BAAINBw and Blohm + Voss Naval, the naval radar validated its reconnaissance and surveillance capabilities.

Cassidian Sensors and Electronic Warfare unit head Elmar Compans said that the new radar has been designed to provide high-operational availability on long-term missions, as well as to enhance survivability of navy ships.

In addition to providing protection against asymmetric attacks, the TRS-4D surveillance radar supports various detection missions for ships both in the open sea, as well as in high-target density coastal zones.

Armed with non-lethal weapons such as water cannons and searchlights for non-provocative deterrence and defence, the 5,500t F125 class frigates will also be equipped with five 127/64 LW Alleggerito lightweight naval guns.

"The new radar has been designed to provide high-operational availability on long-term missions, as well as to enhance survivability of navy ships."

The four Baden-Württemberg-class F125 frigates will replace the F122 Bremen-class ships from 2016.

First production of the radar is scheduled to be delivered next month for installation onboard a land-based system in Wilhelmshaven, while the Germany Navy is expected to receive its unit in August.