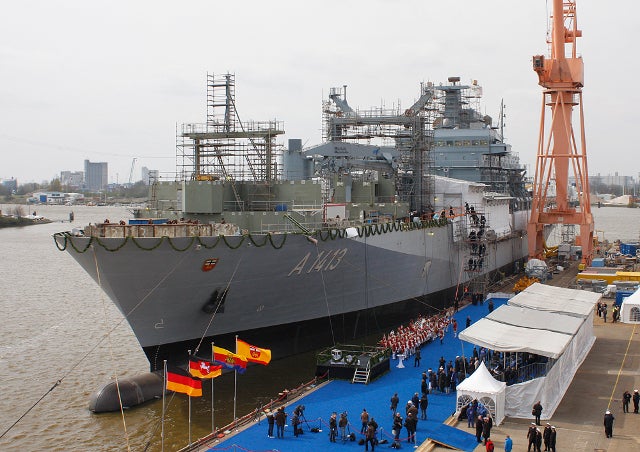 Managed by the federal office of defence technology and procurement (BWB), the batch of the CSS is being built by a consortium of four dockyards in Fr. Lürssen Werft, Flensburger Schiffbau Gesellschaft, ThyssenKrupp Marine Systems and Peene-Werft.

The third CSS features improved functional areas as compared to 1411 and 1412 ships and has been designed to support current operational constraints mainly in environmental protection safety.

As a central and flexible support unit, the third ship will help meet the German Navy’s worldwide operational needs and also provide protection for the soldiers.

The CSS Bonn design has reduced operation and maintenance costs, creating a financial leeway for the German Navy in future.

Emder Werft und Dockbetriebe, subsidiary of ThyssenKrupp Marine Systems, had outfitted the CSS Bonn since May 2011 and the ship is scheduled for commissioning by the end of September 2012.

"The third ship will help meet the German Navy’s worldwide operational needs and also provide protection for the soldiers."

The German Navy currently operates two Berlin-class CSS ships CSS Berlin (1411) and CSS Frankfurt Am Main (1412), which were commissioned in 2001 and 2002 respectively.

The 173.70m-long Berlin-class vessels can carry two helicopters and are equipped with two 24t cranes and an array of 14 medium to small calibre self-defence weapons.

Capable of carrying a crew of 237, the second batch of Berlin-class vessels have a displacement capacity of 20,000t, a beam of 24m and cruising speed of 20k with 45 days of endurance period.