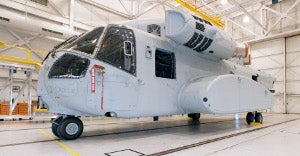 During the testing, the GE38 has demonstrated its inherent durability and performance retention characteristics, which will contribute to significantly lower lifecycle cost for the USMC.

The trials, which marked the completion of all GE’s engine tests needed for the flight test expected for late 2014, also met the USMC’s new engine performance requirements.

GE Aviation GE38 programme director, Paul Acquaviva, said: "The prototype GE38 engine completed one of the toughest engine tests we have ever run at GE, spending the longest time at maximum redline temperatures of any engine in GE history."

"The prototype GE38 engine completed one of the toughest engine tests we have ever run at GE."

The company received system development test article contract in July 2013 from the US Navy for critical parts in advance of a low-rate initial production (LRIP).

Capable of carrying more than 27,000lb of external load in extreme weather conditions, the CH-53K helicopters will replace the existing CH-53E Super Stallions for the USMC in 2019.

The USMC is planning to establish the first CH-53K heavy lift helicopter squadron in 2019.