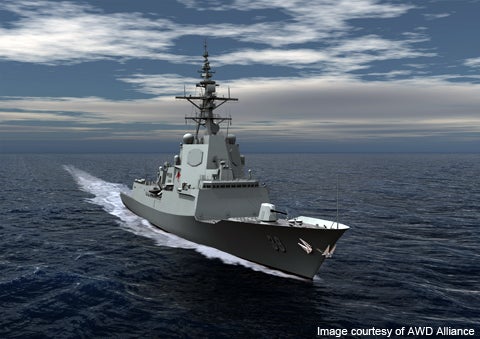 RAN had awarded $8bn contract to ASC Alliance for the construction of three AWDs in HMAS Hobart, HMAS Brisbane and HMAS Sydney.

Each AWD will be equipped with a combined diesel and gas (CODAG) propulsion system, which consists of two GE LM 2500 gas turbines and two diesel engines.

Also known as SEA 4000, the AWD programme involves construction and fabrication of 90 separate steel blocks, 30 for each ship, as well as three sonar blocks, one for each ship.

"The AWD programme involves construction and fabrication of 90 separate steel blocks, 30 for each ship."

Based on the Navantia-designed F100 frigate, Hobart-class frigates will conduct missions such as anti-air, anti-surface, anti-submarine and naval gunfire, as well as simultaneous operations in a multi-warfare environment.

The LM2500 gas turbine engines were designed and developed at GE’s Evendale facility in Ohio, US, while the LM2500’s base and enclosure assemblies were built at Thales facility in Bendigo, Victoria, Australia.