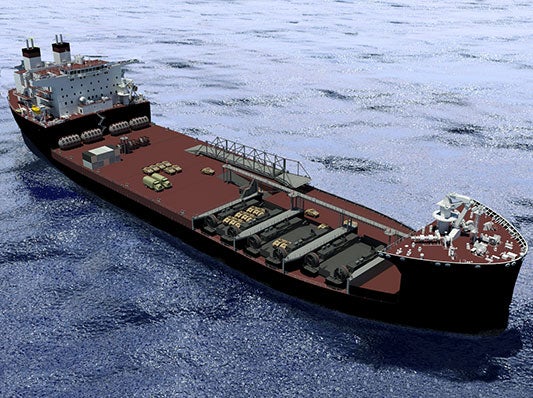 General Dynamics (GD) NASSCO has successfully completed structural assembly of the first Mobile Landing Platform (MLP) for the US Navy ahead of schedule.

The company was earlier awarded a contract for the construction of three MLP ships to enhance the capabilities of the Maritime Prepositioning Force squadrons to enable rapid response in the event of a crisis.

General Dynamics NASSCO president Fred Harris said: "The MLP is the beneficiary of the ship-construction lessons learned during the successful T-AKE programme and a concerted 'Design for Producibility' effort."

"With this ship, we have further reduced construction time and applied improvements that have increased the efficiency of our workforce."

MLP vessels are a new class of auxiliary support ship, designed to serve the navy/marine corps as a transfer station or floating pier at sea to deliver equipment and cargo from sea to shore or when access to other bases is denied.

"With this ship, we have further reduced construction time and applied improvements that have increased the efficiency of our workforce."

Currently, the 233m-long, 50m-wide frigate is being worked on in preparation for undocking on 13 November.

With deadweight in excess of 60,000t, MLPs can cruise at a maximum speed of around 20k and can accommodate a crew of 1,112, along with their equipment.

The flexible, modular platform will join the three maritime prepositioning force squadrons of the US Navy, which are strategically placed worldwide to enable rapid response for disasters or crises, as well as reduced dependency on foreign ports.

The first MLP will be named Montford Point and is scheduled for delivery in May 2013, though it is not expected to be operational until 2015.