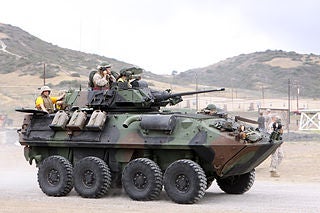 Awarded through the Canadian Commercial Corporation, GD will produce 13 LAV-A2 vehicles for service.

Used as part of the marine air-ground task force missions, the LAV-A2 features a robust suspension for mobility and is capable of conducting a wide range of operations such as security, reconnaissance, attack and defence.

Capable of operating on both land and water, the eight-wheeled mobile, survivable and lethal vehicle system is equipped with improved armour protection and an automatic fire-suppression system for crew protection.

"The LAV-A2 features a robust suspension for mobility and is capable of conducting a wide range of operations.”

Work under the contract will be carried out at the company’s facilities in London, UK, and Ontario, Canada.

The first delivery of the contract is scheduled for June 2014, with the last in October 2014.

Since 2007, more than 250 LAV-A2 vehicles have been ordered by USMC, which is also currently using around 800 units of a previous variant based on the Mowag Piranha LAV vehicle that were deployed for operations in 1980.