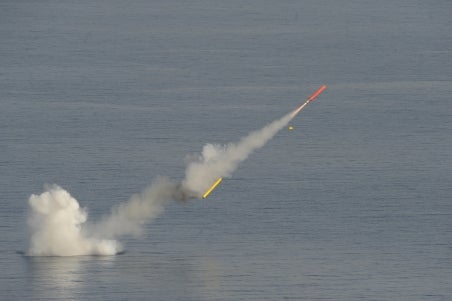 Launched from a platform representing a submerged submarine during the fourth development firing, the MdCN missile validated its GPS guidance mode in the terminal phase, while achieving all objectives of the in-flight test.

The first in-flight test of the MdCN missile was conducted from a vertical launcher in May 2010, while the first submarine test was completed in June 2011.

In July, the missile underwent testing, during which it guided itself autonomously by making use of its infrared scene recognition to hit a target with precision and validated its capability.

"With a range of several hundred kilometres, the MdCN missile can be carried overtly or covertly on combat vessels such as frigates and submarines."

The DGA had awarded a contract to MBDA for the supply of 200 MdCN naval missiles in 2006. MdCN is scheduled for installation on the French Navy’s FREMM multi-mission frigates and its Barracuda nuclear-powered attack submarines by 2014 and 2017 respectively.

With a range of several hundred kilometres, the MdCN missile can be carried overtly or covertly on combat vessels such as frigates and submarines, as well as stationed at a safe standoff distance for extended periods within international waters.

Based on the air-launched SCALP cruise missile, the MBDA’s MdCN is being developed primarily to enable the French Navy carry out deep strikes within enemy territory and destroy strategic infrastructure targets.

The naval variant of the Storm Shadow/SCALP air-launched cruise missile system is available in two configurations. The first being a vertical launch from the FREMM frigates using the compact A70 vertical launcher; while the second is a submarine configuration, where the weapon can be launched through torpedo tubes.