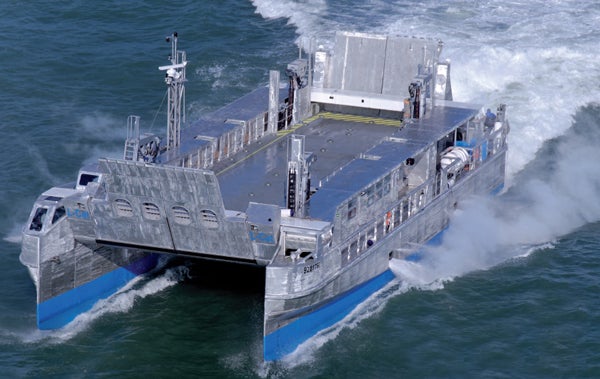 The 30m-long and 12m-wide catamaran landing craft vessel can carry a payload of 80t and will provide five times the landing capacity of the French Navy’s current landing craft.

The EDA-R, when fully loaded, can cruise at a speed of 18knots and will be used for landing military vehicles and troops from ships positioned beyond the horizon (55km) and for humanitarian missions.

EDA-R is a fast catamaran in transit mode and features central elevating deck that enables it to turns into a flat-bottomed ship to beach or enter an amphibious ship’s well deck and is based on a Landing Catamaran (L-CAT) concept.

Two EDA-Rs can be accommodated on each new Mistral-class building BPC amphibious ships in its well deck.

DGA accepted the first EDA-R (L9091) in November 2011 while the second EDA craft (EDA-R 2) in January 2012, which is currently in service with BPC Dixmude for the Navy.

The fourth EDA-R is scheduled for delivery in second half of 2012.

The 199m-long BPC destroyers have a displacement capacity of 21,500t, can cruise at a speed of 19 knots and can accommodate 450 troops and 16 heavy helicopters, including options for one or more landing craft and armoured vehicles.

The Mistral-class ships will replace the navy’s Foudre landing craft transport vessel and will be used as a training ship for the French Navy’s Jeanne d’Arc mission in 2012.

Image: EDA-R is based on a unique concept known as Landing Catamaran (L-CAT). Photo: CNIM.