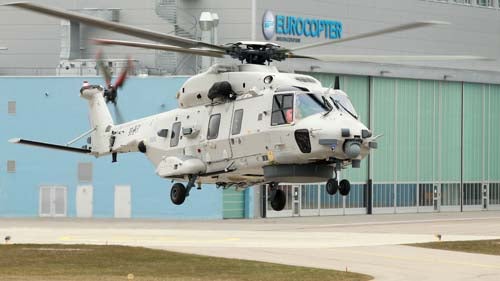 During the 45 minute test-flight, the helicopter in its full operational capability standard was tested by the crew to validate its basic systems and flight qualities.

NHI delegated managing director Xavier Poupardin said: "This first flight is an important milestone for NHI because we know that the Belgian air component has an urgent need to replace its ageing Sea King helicopters."

The Belgian NH90 NFH will now undergo further flight evaluations with industry and customer crews to prove aircraft behaviour and its mission system.

Eight NH90s are set to be delivered to Belgium, with four TTH variants being used for tactical transport operations and the remaining four NFH versions are set to support naval missions.

“This first flight is an important milestone for NHI because we know that the Belgian air component has an urgent need to replace its ageing Sea King helicopters."

The helicopter features a deck-lock system, deck-traversing system, and the automatic blade and tail folding system, which enables the aircraft to operate from small frigates, during day and night, as well as in adverse weather conditions.

The Belgian aircraft is similar to the Dutch NH90 NFH Step B version, which is currently operational with the Royal Netherlands Navy.